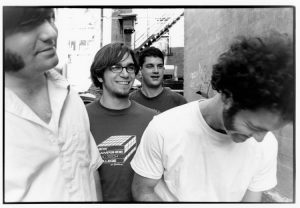 Say ZuZu was the seacoast’s seminal alt-country rock band. Inspired by ye olde rock music of yore, ever-swooning over the folk singers of seacoast coffee houses, and increasingly entranced by honky-tonk music, Say ZuZu toured extensively in the US and Europe, recorded a slew of albums, raised chickens, and grew large sideburns. They crafted earnest lyrics with tight harmonies and ragged arrangements, and their fans liked their music better than their stage banter. ZuZu’s reunion includes singer/guitarists Jon Nolan and Cliff Murphy, as well as bassists James Nolan and Jon Pistey, and drummers Steve Ruhm and Tim Nylander. They are having a special reunion show to celebrate the many shows they played at the Elvis Room in the 1990s.